Unintended pregnancy happens at all reproductive ages, with a peak in women aged 20-24 years.1

During a woman’s mid-20s it is quite usual for relationships and contraception to be changing, although condoms are frequently used. These factors inevitably put women in this age bracket at risk of unintended pregnancy, despite responsible attitudes and sensible use of contraception.

As women get older, they may experience various lifestyle changes, such as being with a new partner, which may also put them at risk of unintended pregnancy. 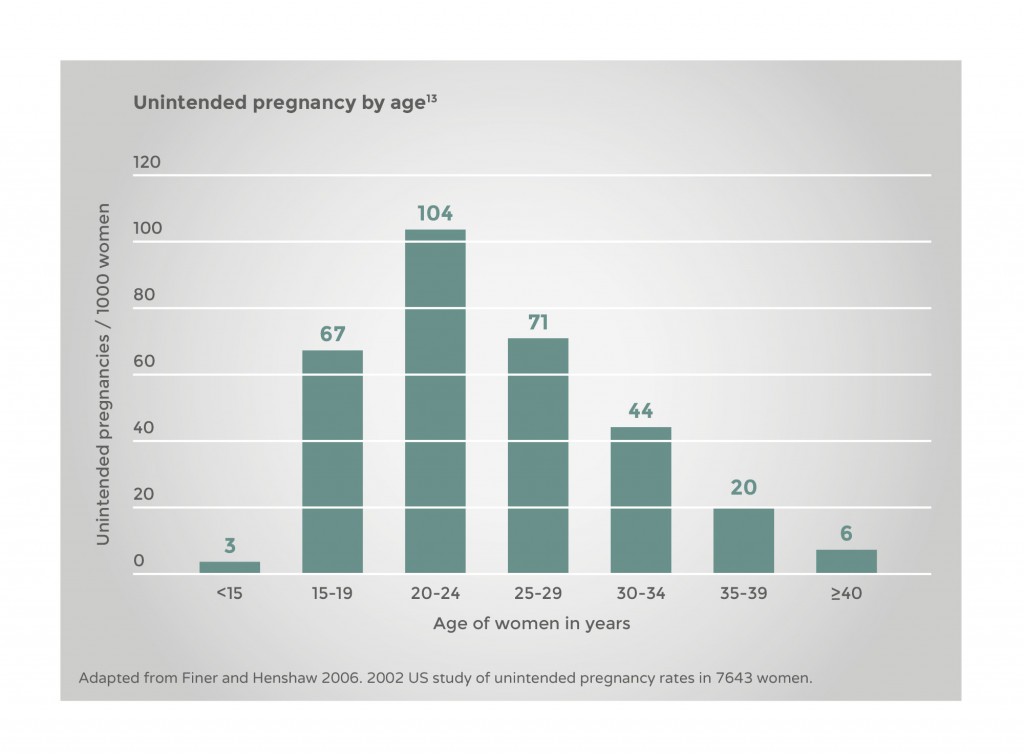 It may be thought that the majority of women who request EHC do not use any contraceptive method.

However, research has shown that 67% of women who requested EHC are using a regular method of contraception (e.g. condom or pill)

If we do the calculation, ‘contraceptive interruption’ is inevitable in a woman’s life, where she is trying to prevent pregnancy from the time she is about 17 years old (mean age of first sexual intercourse) until she is about 50. If she is on the Pill she will need to take about 8000 tablets correctly. It is unsurprising that she sometimes forgets tablets or makes mistakes.

In a large European survey of over 7000 sexually active women, 30% reported having unprotected sex, at least once, in the last 12 months.1

These frequent acts of unprotected sexual intercourse are not happening in a distinct sub-population, but happen irrespective of age, income, education level and marital status.1

Unprotected sexual intercourse can happen, even when a couple consciously tries to prevent it.

Unprotected sexual intercourse can result from a couple not using any contraception,1 including ‘withdrawal’.2 It can also happen when they consciously try to prevent it. For example UPSI can happen as a result of:

– Accidental condom problem1 (breakage, slippage, not on in time)

– A temporary break from the usual contraceptive1

– Forgetting to apply a patch or insert a vaginal ring1

UPSI can also happen as a result of non consensual intercourse (rape).

The majority of women say that there are no particular circumstances that could explain their lack of contraception or contraception failure.1 Only a minority recognised that some factors may have influenced their behaviour, making contraceptive failure more likely.1

These factors included a new partner or relationship breakdown, travel, influence of alcohol or using a new contraceptive method.1

Unintended pregnancies result from unprotected sex where no children, or no more children are desired.

It has been estimated that 44% of pregnancies in the EU are unintended.1

You are on the international website of ellaOne®.
If you want to be re-directed to the website of your country,
please select it from the following list or close this window.

If you are a journalist or media professional,
please visit our Media Centre.

Thank you for visiting