IUDs are considered the most effective EC option,1 however they may not be a practical option for many women, as an IUD fitting takes time and involves an invasive procedure by a specifically trained healthcare professional. The advantage of an IUD is that it provides an ongoing contraceptive solution.1 But when speed is of the essence, women may not want to rush a decision to fit this long acting reversible contraceptive (LARC).

The Copper-T IUD can be fitted up to 120 hours (5 days) after unprotected sex.2 Its use is restricted by its availability and the need to be inserted by a skilled healthcare professional.3

Women who would prefer a copper IUD for emergency contraception must be advised to contact a GP or family planning service as a matter of urgency.2 Pharmacists should direct women to a local service known to provide IUDs.2

It is also common practice to consider offering EHC to these women in case there are any problems obtaining or fitting the IUD, or indeed if they change their mind.

There are two oral ECs available4

The mechanism of action of oral ECs is to inhibit or postpone ovulation, so that no ovum is released.5,6

Mechanism of action of oral EC

EHCs work by inhibiting or delaying ovulation (the release of an egg), so that fertilisation cannot take place.5,6

EHCs are suitable for women of reproductive age and are generally well tolerated.5,9 EHCs do not protect from sexually transmitted infections (STIs).8

EHCs are back-up contraception solutions, which do not replace a regular contraceptive method. 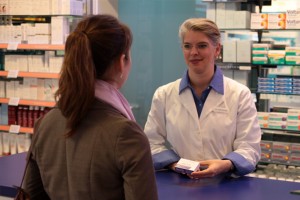 Women may also like the anonymity of the pharmacy as they can feel embarrassed about needing emergency contraception.3

Pharmacy access to EHCs has not led to any negative consequences

Studies show that women and adolescents with greater access to EC are more likely to adopt an ongoing contraceptive method after EC use.9 Notably, it has been shown that greater level of use through non-prescription availability:

Good Pharmacy Practice can include:

The quality of the pharmacy interaction is an important determinant of appropriate use of the product. It is also likely to be an important factor in a woman’s decision to take action in the event of a future UPSI.

Emergency contraception (EC) is defined as the use of any drug or device after unprotected intercourse to prevent an unintended pregnancy.1

It is an ‘after-sex’ or ‘back-up’ contraception solution.

It is also commonly known as ‘morning-after pill’ or ‘day-after pill’.

Emergency contraception can best prevent pregnancies when used soon after intercourse. It provides an important back-up in cases of unprotected intercourse or contraceptive accident (such as forgotten pills, torn condoms) and after rape or coerced sex.2

You are on the international website of ellaOne®.
If you want to be re-directed to the website of your country,
please select it from the following list or close this window.

If you are a journalist or media professional,
please visit our Media Centre.

Thank you for visiting